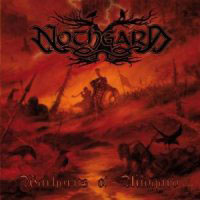 That which once was just folk metal has the last decade sprung into a multitude of subgenres. The two biggest of these genres would be folk metal (Equilibrium, Faanefjell, Månegarm) and warrior metal (Amon Amarth, Obscurity, Balfor). The biggest difference being that the former forms their riffs more in tune with traditional folk song structures, whereas the latter are death metal with folk inspired lyrics and moods within their straight forward death metal anthems. There are also an abundance of smaller genres, such as pagan metal, Celtic metal, Viking metal and medieval metal. All of which are nuanced variations of folk metal.

There is a reason for this opening digression. The German debutantes in Nothgard have one leg firmly planted in folk metal, the other in warrior metal. And they visit other folk related genres on their way. Being that this is their debut, I must say that it is very promising. The album has the sort of naiveté which made Turisas’ debut folk metal album of the last decade. Where Turisas never managed to top their fantastic debut, I believe there is even more to expect from Nothgard in the future, even though “Warhorns of Midgard” is a really good album.

It is hard to describe Nothgard’s style accurate, which incidentally is both their strength and Achilles heel. Take the song “Under the Serpent Sign” and it sound to me like a mix between Turisas and Mithotyn. The bands mix between folk and warrior metal is what gives them their identity, but at times they don’t seem to be sure what direction to take. When incorporating other folk related genres as well the songs has a feel of inconsistency. I might be very picky here. If this album was released 10 years ago I am sure it would have been an instant hit, but today I need a little bit more.

I do like Nothgards folk/warrior metal, also like their 10% power metal influences on the guitar side, which never overshadows the harsh warrior mood of the album. I just feel that this could be even better. I will definitely follow these guys in their future endeavors. I wish them the best and hope that my predictions will come true. If they play their cards right Nothgard could easily take over where Turisas so miserably failed with their last album. Go Nothgard, finetune your warhorns, and rise to your true potential.

EVENSTORM – The Return Of The Storm