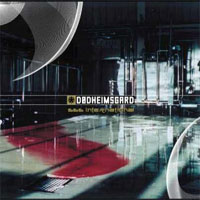 The year 1999 marked Black Metallers Dødheimsgard transition from Black Metal to industrial/avant-garde metal. Or so I have heard. As I was listenting, I thought to myself that some leads reminded me of 1349 and it comes as no surprise to note that this album was originally released on Moonfog productions. The year 1999 was also characterized by the inability to master digital production, which leaves the listener with a muddy mix, but since we are not one to judge a record after the first listen, this is just a superficiality.

On the most general level, this record represents an amalgam of middle to high speed black metal and (martial) industrial with some piano instrumentals interspersed. The harmonies are very inaccessible for the non-musician. I admit that I never found an access to "classical" music (piano or otherwise) and I am also not really interested in music theory so my understanding of this record may be lacking. So while this album might be interesting to a student of postmodern music, for me there is nothing exceptional to be found here. I don’t see why a danceable industrial beat should alternate with high speed black metal. Why mellow piano melodies have to be contrasted with noise I also cannot answer. Same situation with the black metal rasps and the sermon like industrial vocals. The lyrics are very cryptic but I sense that they might just be for the sake of it. So some avant-garde intellectuals can have fun trying to decipher the unsolvable puzzle.

I recently heard a quote from a postmodern composer of classical music, can’t recall his name, but what he had to say went along these lines: "I don’t enjoy my music, I just compose it because it has not yet been done and because we can do it." That pretty much applies here. Someone motivated enough could re-cut this record to be one decent martial-industrial and one black metal EP. After stripping away the obvious Moonfog-influences, it would certainly be a rather good record.