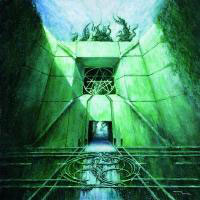 "Abzu" is the second of a planned three album cycle by Texas titans Absu. Following on from 2009’s perhaps confusingly titled but nonetheless awesome "Absu", this release offers more of the same musically; speed/thrash that draws equally from black and death metal yet with progressive overtones. It is pretty much the same formula Absu have adhered to for the past decade, so those already familiar with the band will know what to expect. Those unfamiliar with Absu’s music can expect a high energy assault with light-speed riffing and Proscriptor’s incredible drumming.

Lyrically, I have no idea what the guys are on about, but then I never really do, so no change there! Suffice it to say Absu are once again targeting Sumerian mythology and various systems of magic(k). The production and mix are clear and bright, capturing every note and beat cleanly without adding much in the way of personality, but then again Absu have always relied on the songs rather than the sound to get their message across.

Track 6, "A Song for Ea" marks something of a departure for the band clocking in at 14 minutes long for the clear standout track of the album. It is here that Absu really get a chance to flex their muscles and demonstrate what they can do in terms of dynamics and creating different moods.  "A Song for Ea" also houses some of the most memorable riffs on the album. The only fault I can find with this track is that it feels more like a medley to me rather than an extended exploration of a musical theme, but that is a minor point in the scheme of things.

While not quite hitting the highs of "Tara" or "Absu" this is another outstanding release from an exceptional band. Check it out, and don’t miss them live!