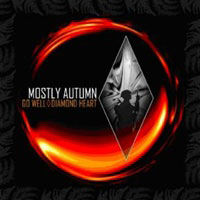 This British progressive rock seven piece have an airy, acoustic meets electric sound on this 8 song album. Although many of the influences appear 70’s based in riffing and melody structure, there’s an exciting spirit in the harmonies and dual male/female lead vocals of tracks like “Something Better” and “Hold The Sun”. Artists as diverse as Asia, Marillion and The Moody Blues come to mind when taking in an up-tempo number like “Deep In Borrowdale” – guitarist Bryan Josh flashing a lot of his emotive lead work with the best Steve Hackett and Steve Howe inspirations at the forefront.

Olivia Sparnenn isn’t your typical female vocalist who reaches for the high notes at all times. Much like the quieter atmosphere of a ballad like “Back To Life” she keeps her voice restrained and within the guidelines of the arrangement – only rising to meet the challenge of the instrumentation. The chance to open for acts like Uriah Heep, Jethro Tull and a special stadium show for Bryan Adams shows audiences that Mostly Autumn have their sights set on bigger rock heights, and I believe their professional songwriting and subtle dynamics within the guitars, keyboards, bass and drums allows for unique playbacks months after your first exposure to the record.

Taking the independent, self-release route keeps the integrity of these songs, and I doubt many bigger labels would know how to properly market Mostly Autumn better than they already are accomplishing themselves. “Go Well, Diamond Heart” isn’t bombastic in any manner – it’s one of those left of center progressive rock efforts that rewards the listener who appreciates the ebb and flow of sound.