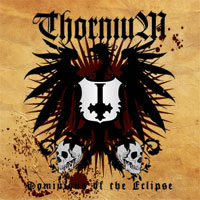 The third album from Sweden’s Thornium hit me pretty hard. I rated the forerunner, "Mushroom Clouds and Dusk", pretty high and when the new album arrived, I was dumbfounded by the production, ready to dismiss it as an overproduced successor from a band mistaking high production value for talent. Similar to Dissection with their "Reinkaos" album, Thornium go for a relatively clean production with only a minimum of distortion on a crystal clear sound.

So does this album surpass it’s progenitor? A resounding no is the answer. Apart from the clearer production (and I don’t know if that is a good thing), the band has chosen to include some relatively dumb spoken word parts and choruses which make me think of some Type O Negative clone (new Mordbid Angel anyone?). The tendency to include more complicated rhythm is put off by these and breaks the listeners immersion. Other than that, having just listened their last two albums back to back, I really miss the otherworldly sound of the guitar soli, which are, as mentioned above, replaced by crystal clear and more harmonious ones that do not really blend in.

It is pretty obvious that the band is inspired by the "Order of the Black Flame" ideology that Dissection and Watain notably dabbled into… actually, the album overflows with this imagery and ideology, lyrically speaking. At times I feel reminded of some NSBM bands which try to use the music as a propaganda vehicle and in order to do so try to make the lyrics as understandable as possible within the genre’s boundaries. I don’t like having ideology spoon fed to me so this pisses me off.