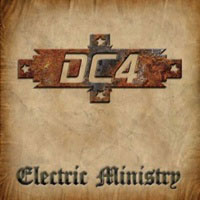 For those not in the know, DC4 consists of veterans Jeff Duncan on vocals/guitar and Rowan Robertson on guitar – the former of Armored Saint fame and the latter one of the young guitar prodigies of Ronnie James Dio during his solo years. Filled out by Matt Duncan on bass and Shawn Duncan on drums plus guest appearances from Dizzy Reed on keyboards and Gonzo on some percussion assists, “Electric Ministry” is a flurry of hard rock with some slight nods to the past. Lyrically running the gamut from sex in “XXX” to law breaking in “25 To Life”, this is a guitar players dream record – with loads of power riffs and solos to latch onto.

Jeff on vocals eerily has a similar mid-range as John Bush, although his lower moments are much more bluesy and conventional like the thunderous “Rock God” or the slightly modern sounding “People”. There’s even a sense of The Beatles circa their “Sgt. Pepper’s” years on the psychedelic atmosphere within “The Ballad Of Rock And Roll”, with Rowan laying down precise notes during the solo phase that rival the best Randy Rhoads moments. Not everything latches onto my brain – the distant vocal effects that permeate the alternative sounding “Sociopath” are something I would expect from a younger band, not musicians who can clearly play and sing without benefit of computers or samples.

“Electric Ministry” isn’t an album that throws down a lot of surprises – which makes DC4 very easy to click upon instant exposure. I sense most who’ve followed Jeff and Rowan through the years won’t find this a tough sell – but to others on the fence, if you miss the street ethics of late 80’s and early 90’s hard rock with a touch of power finesse, this album could be your calling card.