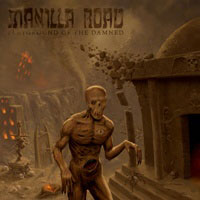 I’ve been fortunate to gain the chance to see a lot of the early pioneers in the metal business through the years. Especially when you are willing to trek to other parts of the country for 2-3 day festivals such as Powermad or the Classic Metal Festival as I did in the late 90’s and early 2000’s. Never expecting to see this Kansas act who started in 1977 and have released such classics through the years as “Crystal Logic”, “The Deluge” and “Mystification”, I gained the chance to see this band twice in 2001 and felt their jaw dropping epic heavy/power metal sound rip me to the core.

Onto studio album number fifteen for the quartet, “Playground Of The Damned” appears to be more of a down to earth affair, with emphasis on melodic singing and tighter arrangements all within the 4 to 7 minute landscape. Does this mean Manilla Road have gone ‘soft’ or more ‘commercial’ in their elder years? No way… you’ll still get the prolonged Mark Shelton guitar solos, the darker musical themes that straddle doom and traditional/epic lines and a thunderous drum assault from Cory Christner.

The opening 85 seconds of “Jackhammer” lives up to it’s namesake before vocalist Bryan Patrick rises above with his mystical, magical voice – slinking in and out like the best snake charmer in the business. Other numbers like “Grindhouse” and “Art Of War” incorporate fluid acoustics to set up the future electrified action. The bass/drum triplet marching during the verse transitions of “Into The Maelstrom” makes you feel a part of this tribal activity, your arms and body swaying in unison to the rhythms. The production remains basic as Manilla Road prefer to keep their sound as close as possible to what you would hear in a live setting.

This band separate the true believers from the scene jumpers. Their worldwide cult following lives for new material, and “Playground Of The Damned” does not waver in their commitment to unrelenting, non-compromising epic metal.

ABIGOR – Channelling The Quintessence Of Satan 2011