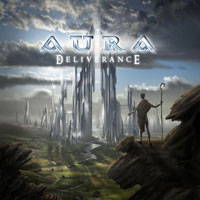 We’ve seen it coming for a few years. Record label models are changing as fast as the weather. Physical product sales are becoming arcane and more of a collector’s market. The newest generation of music followers prefers instant connection and desire music in digital formats – portable for access anywhere they are in their lives. This Italian progressive rock/metal four piece embrace the tides with this second album “Deliverance” as a digital only release. Years ago, I would have protested on principle – but I too must be willing to accept change and understand that I can still buy the physical product when available from other acts and also find gems in the digital world.

Aura have a timeless quality to their sound – which starts with the soothing, passionate multi-level melodies from drummer Giovanni Trotta. His pronunciation and English skills are quite exemplary – right from “The Arrival” in its opening verses you can tell he doesn’t force his voice so much as stride gallantly into the material. All the musicians play an important role in the layers of sound Aura display – keyboardist Francesco Di Verniere takes 70’s oriented sounds a la Genesis, Kansas and ELP but incorporated real piano strains and classical runs, almost like Saga in a song like “The Eden’s Tree”, and bassist Angelo Cerquaglia takes the lead with a few heroic moments during the tempo juggling “In My Memories”. Guitarist Giuseppe Bruno gives Aura more of their metallic overtone- although he too isn’t afraid to showcase his adept clean layers and sometimes acoustic abilities, working with emotive build ups in a centerpiece ballad such as “The Bridge Of Silence“.

Another benefit Aura have over most progressive bands is their desire to establish their arrangements with intricate maneuvers and yet don’t feel the need for 10 minute plus song constructs – as the average track barely hits over six minutes. After multiple exposures “Deliverance” impresses me more and more, as it’s not trying to resemble any one particular act or time period in progressive metal/rock. Those into Threshold, Spock’s Beard and others in that ilk have another band to load into your portable stereo devices.