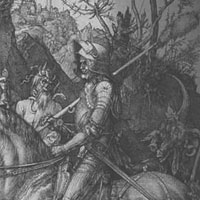 ABIGOR – Channelling The Quintessence Of Satan 2011

The band has rearranged the original tracks, recorded new bass and laid new vocal arrangements on this 2011 version of the 1999 album. The lyrics are revised.

I do rarely like rereleases. Rerecordings are really not my cup of tea. That the 2011 version of "Channelling…" is a mix of both is not favourable either. But, and this is important, the new album has the atmosphere of Abigor 1990s, with the will to power of 2011. I remember that their "Nachthymnen" and the "Opus IV" releases did the magick, while the follow three releases were ok, but no classics. However, with the improved sound and the up-to-date vocals "Channelling The Quintessence Of Satan" has turned into a black metal album that is more than mere fuzz.  It’s easier to notice the transformation from parts to part, from songs to songs…

I don’t know if the final release is divided into the original eight songs, as my version consists of one 44 minutes long track. But having their former release in mind, the amazing journey through "TIME…", long songs are not necessarily a bad thing. This said, the album still consists of 8 songs, let’s not forget. And it’s hard to pinpoint any favourites, since these songs seem to melt into one, yet still there is variation from beginning to end. And those German plays, or quotes, add to the mystery. Interludes, intro or with another purpose? I don’t know, but I like it a lot, since those small parts give me some calm before the storm moments.

Abigor anno 2011 is a creation that deserves way more attention than is actually given to them. I know, small label, no touring. And in a world where fast food is a consumer’s dream, "Channelling The Quintessence Of Satan 2011" is more like strawberry in a pile of blood. Yes, dangerous, tasty and something out of the ordinary.

My Abigor favourite is still "Fractal Possession", an amazing journey through hell. But mind you, even if this 2011 release is not on par with that, it still great and it contains a second CD, namely  the 4 demos in its entirety, most primitively recorded in 1993/94 on 4 tracks.