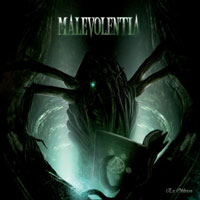 French lyrics rarely do the trick for me. Not that I give a shit about understand the words, but it’s more a question of the sound of the words, related to extreme metal. The grimness that in example English possesses is more my cup of black tea.

Language aside, Malevoentia’s orchestral/symphonic black metal is of that kind that would’ve impressed me a lot in 1998. And "Ex Oblivion" wouldn’t have been too far behind "In Abhorrence Dementia" by you-know-whom. There are several goodies to digest during the listening, like the gigantic closer "LA Geste du Corbeau" with the almost over the top symphonic approach, just like yours truly like it.

However, the factor that makes "Ex Oblivion" a lesser album having the ideas it holds in mind, is the sound. Yes, a think black metal did wonders back in 1997, but now in 2011 we demand more. If you’re into symphonic black metal, I’m sure you’ll have a few spins that will make you enjoy the darkness in life, no doubt. And you may even want to play it again. But the sound and the language makes this an enjoyable album only, and not the masterpiece is could’ve been. Since, after all, the ideas are there.

SOLITUDE AETURNUS – In Times Of Solitude

ARCTIC FLAME – Guardian At The Gate