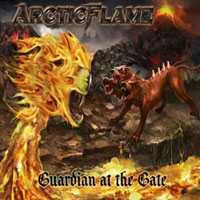 ARCTIC FLAME – Guardian At The Gate

Early in a band’s career, you forgive musicians for lacking experience or money in many departments as they develop their way. As the years tick away though, a sense of professionalism needs to enter or artists will remain on the proverbial sidelines as newer upstarts willing to learn and grow ascend the ranks. Power metal band Arctic Flame are releasing their third full length “Guardian At The Gate” in their decade long existence – and overall after a few sessions with this material I wonder if many will give this New Jersey quartet much of a chance due to some serious production/tone issues with the final product.

It’s not that these musicians can’t play – they have the chops to deliver traditional, American-styled power metal with occasional nods to traditional riffing, cultural themes and even a progressive passage here and there. Iced Earth and Iron Maiden are two significant starting points for Arctic Flame – guitarist Sebastian Garcia loves ringing runs much like Adrian Smith and also combines the riffing technique of Jon Schaffer on songs like “Burning Their Throne” and the title track. Newest singer Michael Clayton-Moore has one of those epic ranges – well suited to the arrangements and occasionally veering into witty Bon Scott-like charm on “Raise Your Glasses”.

Where this album runs into a ditch for me is solely the bare bones production. You get the feeling that Arctic Flame tried to do the best they could with a four figure budget, but when compressed and mastered songs like “My Little Slice Of Hell” and “The Creeper” sound like they were recorded in the basement in 1981- back when bands and producers struggled to get adequate tones and evenness with their final product. The one who suffers the most is drummer Mike Paradine – as you wonder where’s the bass drum and that synthetic snare snap will probably drive most crazy.

If I saw this band live before hearing the album, I may reverse my overall outlook on the band. Unfortunately the opposite occurred – and in this flooded marketplace, you rarely get a second chance to make that important first impression.