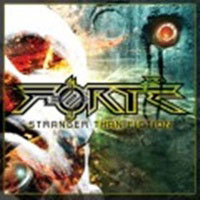 There’s something about your first memories of underground metal. When you discover there’s more to life than what major media throws at you, your horizons expand and it’s almost like your appetite doesn’t subside. You crave more, you seek out deeper sounds and don’t care where the bands come from in your favorite genres. For me, I’m thankful that bands like Oklahoma power/thrash act Forte hit my radar screen during my college years. Writing about their demo material for publications like Curious Goods back in the early 1990’s led to my continual journalist pursuits 20 years down the road.

So it’s not shocking to see their debut album “Stranger Than Fiction” get a proper re-issue treatment, along with 11 bonus tracks – the 2 demos prior to signing with Massacre Records and a 2011 version of “Dementia By Design” that serves notice that Forte are back, recording a new album and proving to the world that their power sound hasn’t lost any vitality. Signing as a direct result of positive fanzine/ European press and a Foundation Forum appearance, “Stranger Than Fiction” just carried itself with riffing that ripped your head off, rhythms that contain purpose and drumming unafraid to juggle double bass and thrash-like snare/ tom rolls against traditional power play when called for. “Coming Of The Storm” within its short 3:11 timeframe put forth a Steve Harris meets Cliff Burton-like bass solo, James Randel’s racing vocal melodies and just one riff after another that gears up metal heads for air guitar action. The follow up “The Inner Circle” appears to mutate the best of Helstar, Flotsam and Jetsam, Forbidden and Metal Church with its power and progressive techniques – probably one of the reasons why the overseas metal press and fans understood Forte much more than their own domestic market place.

The album and demo material received proper re-mastering treatment from Jamie King, even though the production values were already very good for the time period. Sometimes bands appear on the scene at the wrong time period – for whatever reason, be it changing music trends or just general lack of proper understanding. Forte hopefully regain their just acclaim in all areas of the globe – this is power/progressive thrash done par excellence.