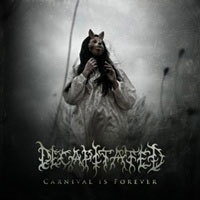 Oppression translates into fierce emotional and physical manifestations. While many would strike out with hands and fists, others take the pain, the fear, and the misery and channel it through the power of music. As a result we are currently in a renaissance with certain countries who may have lagged behind when other movements were blowing up internationally. Metal really appeals to blue collar, hard working people from Asia to Zaire, and one country firing on all cylinders lately for death metal is Poland.

Yes, we all know the fathers of the movement in Vader – but a younger act who’ve certainly climbed up the ranks with their four previous albums of technical death metal would be this act Decapitated. Tragedy struck in 2007 as drummer Witold ‘Vitek’ Kieltyka died in a bus accident while on tour in Russia – but main guitarist Vogg soldiers on with new members Rafal Piotrowski on vocals, Filip Halucha on bass and Kerimh Lechner filling the drum slot and “Carnival Is Forever” doesn’t relent in its pursuit for heavy, tight, precise musical reverberation.

The title track attacks with a slow, tribal percussive motion as the guitars just churn with this mechanized off time picking and then the quiet mid-section lulls you into a dream state before the final two and a half minutes of this 8:49 epic return to blood curdling screams and punishing riffs. “The Knife” features another scattershot drum/ guitar interplay motion where the snare, double bass, guitars, bass and vocals often appear to go in altered time change states and yet it doesn’t sound like the arrangement is running rampant off the tracks. Some may worry about the excessive squeals that veer dangerously close to Fear Factory meets metal-core territory on “404”, but once again Vogg’s relentless down tuned chords, ascending speed laced solo and technical magic in the instrumental sections should win you over.

You’ll even get a Rush-like bass solo in the opening strains of “A View From A Hole” – I mean how many death metal groups are willing to throw caution to the wind for dynamic viability? Five years away from the recording scene, “Carnival Is Forever” illustrates the vigor and strength of the genre when reaching for more than mere blast beats and sonic brutality.