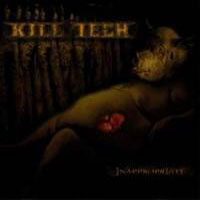 "Inappropriate" is the first full-length release from Norwegian Death/Thrash five-piece Kill Tech. As an opening statement, it is a promising proposition. The emphasis is on the song-writing, which is varied and dynamic. This is thankfully not one of those releases where each of the band members is too concerned with showing how fast and technically they can play to actually concentrate on making the music sound as strong as possible.

The production catches both the power and the groove of the songs without getting in the way of the melodies. Kill Tech are at their best on tracks like "Ground Zero" where the catchy punk-influenced riffs shine through and the drumming will have you playing imaginary double bass with your feet under the table.

The only problem with the album is that it clocks in at only slightly over 20 minutes, meaning it is probably closer to EP than album length. The tracks are all short too, running an average of slightly under 3 minutes each. Having said that, they do work well individually and as a whole, but I can’t help feeling disappointed that the album is over so quickly each time I play it.

As far as I know, this is a self-published effort. I can’t see any reason why this shouldn’t secure the guys a deal with a known label and I’d be very interested to see how they would do on a longer release with a bit more money behind them.

Short and sweet, this is a highly accessible album that will demand replays.