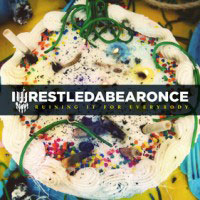 IWRESTLEDABEARONCE – Ruining It for Everybody

Iwrestledabearonce, the American metal band with the original name, is back with their second full length effort, “Ruining it for everybody”, the follow-up to 2009’s “It’s All Happening”. Mixing together several musical genres the American five-piece creates a musical landscape fitting somewhere between pop based synth and modern metalcore insanity.

With modern day metalcore as a foundation and adding on anything that comes to mind, the musical originality of “Ruining it for everybody” feels like a breath of fresh air into a crowded metal world. Putting female singer Krysta Cameron’s vocal chords to the test, the album fluctuates between high pitched growls and calming, soft female vocals. Iwrestledabearonce set their own personal, unique twist on the trend of mixing the brutality of metalcore with soft vocal tones. With tracks such as “This Head Music Makes My Eyes Rain”, where Krysta Cameron shows how beautiful her voice truly is without the backing of fast paced metal, and “It is “Bro” Isn’t it?” Iwrestledabearonce put themselves in the lead for originality. The latter mentioned track opens with a touch of deathcore, drifting into metalcore and finally adding a touch of female affection for sections of the vocals.

Throughout “Ruining It For Everybody” seems to have a well thought out structure. The tracks drift together, keeping some aspects and changing others, making the album very easy to listen to without making it repetitive or stale. The brutality never overshadows the slow sections and apart from the mentioned “This Head Music Makes My Eyes Rain” the calm aspect of the tracks never seems too dominating.

Iwrestledabearonce offer a lot no one else can with “Ruining it for everybody”. More than anything else most listeners choosing to clinch to this album will embrace it for its originality. The brutality of most other modern bands is there but it is an ever changing process of musical genres fully elaborating on the band’s ‘avant-garde’ label. It is possibly the most innovative album of the year.