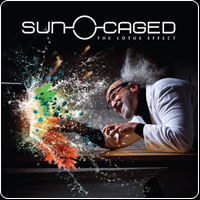 Consistently on a four year release course, Dutch progressive metal act Sun Caged aren’t going to short change the listener with this third album “The Lotus Effect”. Guitarist Marcel Coenen (Lemur Voice) and vocalist Paul Adrian Villarreal make quite a combination for the foundation of the band – directing the sound into a variety of directions while keeping the heart and soul of forward thinking, challenging landscapes at hand. The album could almost be split in half – the final 7 songs comprising a 22 minute plus epic subtitled “Ashtamangala (The 8 Auspicious Symbols)” while the first 7 songs are individual compositions that range from light, airy progressive sounds such as “Reductio ad Absurdum” through standard hefty sonic arrangements with low tuned guitars and effect laden vocals such as “Shades Of Hades”.

Sun Caged excel at the subtleties – drummer Roel van Helden for instance epitomizing the title “Tip Toe the Fault-Line” along with bassist Daniel Kohn, as they lay down a thick groove and occasionally open up their jazzy flash without overplaying the softer, open sides of the song. Where the off time tempo change can take place with Marcel at the lead, while keyboardist Rene Kroon fills in the gaps and presents a darker nature to the proceedings. Fusion flavor flows freely for “On Again / Off Again” – the four instrumentalists giving their talents while Paul deftly weaves in the soaring, melodic vocals to give listeners the hook to pull it all together.

Lyrically tackling deep topics through politics, relationships and philosophy with modern reference points, Paul has one of those comforting voices, crossing paths with Sieges Even and Threshold yet with a 70’s Steve Walsh or Tommy Shaw higher range affect. A 71 minute album can be tedious to most ears, but there is so much dynamic versatility within the 14 tracks that Sun Caged accomplishes so much without redundancy and with a clear sense of vision and forethought.

Third studio albums are usually the dividing line between triumph or tragedy. Place “The Lotus Effect” firmly in the former – as it will challenge and invigorate the brain cells continuously.