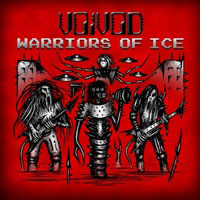 Pioneers never get their just rewards while living and breathing – especially in the metal business. Canada’s alternative, progressive/ thrash institution Voivod release a 15 song live album, recorded on their “Infini” tour during December 2009. Featuring 3 of the original lineup and latest guitarist Dan “Chewy” Mongrain in place of the sadly departed Piggy, “Warriors Of Ice” was recorded in Montreal, Canada and features a solid slate of material from their 1984 “War And Pain” debut through 1991’s “Angel Rat”, plus two songs from their most recent studio album.

Outside of the expected numbers that the faithful would string the band up for not playing (“Tribal Convictions”, and their interpretation of Pink Floyd’s “Astronomy Domine”), I’m happy to hear deeper cuts like “Tornado” from “Killing Technology” and “The Prow” from the highly underrated “Angel Rat” record. Pretty much across the board you get a great smattering of what makes this Canadian quartet so special – Snake’s snarling, left field vocal mannerisms that are part punk-influenced, part metal and quirky yet charming, Away’s progressive drum parts, Blacky’s thick bass tone that almost acts as a second guitar sometimes and then Chewy churning out Piggy’s special guitar mindset and hand rifling chord structures. Even the two newer songs “Global Warning” and “Treasure Chase” still possess the dissonant tones and reckless, go for it abandon that bands 20 years younger wish they could refine and deliver on stage like Voivod continually does.

And if nothing else, Snake’s French-Canadian talk and maniacal rants in between some of the songs will provide you with some possible language acquisition time. If you’ve yet to discover anything Voivod related, “Warriors Of Ice” would be an excellent introduction. Perfect for those who feel on the fringe, left out, alone, and in need of something that will speak to their mixed ball of emotions.