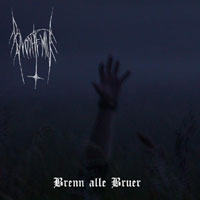 Another Black Metal demo from Norway. How many that now exists is impossible to say, but there’s plentiful, that’s for sure. This is Blodhemn’s second demo, fronted by Invisius who recorded this demo in Conclave & Earshot studio. Five songs of cold and wellplayed music of the dark.

It’s nothing you haven’t heard before, there are thousands of demos and albums with music like the sort Blodhemn are playing, but still this sounds better than many of the others. But then again, there are many that are far better. However, Blodhemn has something to offer – the riffs on this demo are well executed, the vocals got the typical snarl that fits this music so well and the structures of the songs are good. Some thrash riffs have found their way into Blodhemn’s music and I’d rather they didn’t, I do not find it appealing nor fitting in the compositions. Productionswise there’s nothing to complaint about, it all sounds good…

All in all a sign of a new band that has the potential to become something more than ‘another in the flock’. As mentioned, nothing new, but quite interesting.

IN SOLITUDE – The World. The Flesh. The Devil