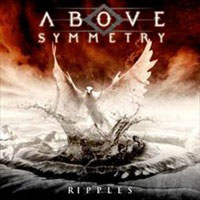 Another jewel in the burgeoning Norwegian progressive metal scene, “Ripples” comes out as a re-issue a year after its initial appearance more so due to reestablishing market presence than anything else. You see, the five piece from Skien hit the scene as Aspera and gained the chance to perform with Tarja Turunen in Spain and Switzerland plus a few festival gigs before a technical snafu forced these musicians to continue under the fresh Above Symmetry moniker. So for those of you who already purchased “Ripples” – you can decide whether 3 bonus tracks and the “Traces Inside” video clip are enough to get an additional copy. To those novices who haven’t peered into this progressive act, let’s delve into the 9 songs, shall we?

First off, vocalist Atle Pettersen certainly has the charm and grit to be a special progressive metal vocalist. He’s appeared on Norway’s version of the X Factor, making it all the way to runner up in the finals. Checking out his work on “Remorse” and the title track, he has one of those voices that reaches for the gut a la Terence Holler from Eldritch yet the smoothness in the higher ranges like a trained pop or AOR superstar. Musically the four instrumentalists of Above Symmetry keep the songs moving energetically, focusing on slight dynamic tempo changes and illustrating flashes of technical brilliance through Robin Ognedal’s guitar fury and keyboardist Nickolas Main Hendriksen’s neo-classical meets Dream Theater embellishments. “Between Black & White” at 8 minutes, 12 seconds even gives bassist Rein Blomquist and drummer Joachim Strom Ekelund a chance to retain solo spotlights against deep organs and more extended note holding from their band mates.

Pagan’s Mind and Circus Maximus may be starting points due to their obvious domestic presence, but I believe Above Symmetry attempt to separate themselves from the pack due to that ‘scratch and claw’ factor that makes material such as “Catatonic Coma” and “The Purpose” infectious and personal to every listener. They don’t feel the need to dazzle merely the virtuosos – Above Symmetry have the wherewithal to keep the arrangements at an intelligent but comprehensible metal level.

A lot of other countries need to look at the talent pool in Scandinavia these days and realize progressive metal still has vitality – “Ripples” proves it time and again.

THE FALLEN DIVINE – The Eternal Past And Future