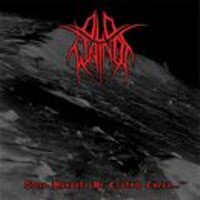 OLD WAINDS – Where the Snows are Never Gone

“Where the Snows are Never Gone” was originally released as a full-length demo in 1997, garnering a certain amount of respect from fans and critics alike. While some hailed it as a seminal offering others were less impressed, seeing it as a good, but not remarkable release. The approach was raw, cold and harsh – similar in style to what many BM acts were putting out in the early to mid 1990’s.

Now, for some reason Negative Existence has chosen to re-issue “Where the Snows are Never Gone”. If you like 90’s style Black Metal, this might be for you. The vocals are amazing, alternating between the traditional rasp and a hellish bass croak. The sound is pretty good too – lo-fi and grim, but clear enough that you can distinguish what is going on most of the time. The guitars could do with a bit more volume, though.

In the final analysis, the songs aren’t strong enough to make this a release I could recommend and to be honest I think BM has moved so far in the last decade that it would really only interest hardcore purists.

PEGAZUS – In Metal We Trust