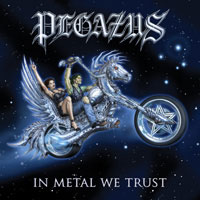 PEGAZUS – In Metal We Trust

Australia’s Pegazus returns to the scene with their fourth studio album. 9 years after “The Headless Horseman”, it’s not as if this traditional metal outfit have been idling their time away. They’ve released a live album, a DVD documenting their history and reconvening in 2009 with some domestic comeback shows before taking their time on this new 11 song platter. Returning with original vocalist Justin Fleming, the quartet aren’t straying from their established method of playing and execution. “In Metal We Trust” lives by the guitar riff, the melodic vocal, the lyrical premise for the genre (4 of the 10 main tracks containing rock or metal in the title alone) and assuredly lives for the early British 80’s scene for inspiration.

Pegazus focus on keeping the guitar hooks on high, the double bass flowing when necessary and the tempos steady and traditional when not, plus a dynamic singing presence who brings the word pictures to life with his lower comfort and occasional piercing upper range notes. The sound samples and voiceovers through songs like “Road Warrior” and the opening church-like sermon on “Old Skool Metal Days” add a bit more of personal charm to Pegazus and their mission to keep the metal straight ahead and on point. Justin’s normal comfort zone lies in the mid-tempo sneering variety, even in their interpretation of “Metal Gods” by the mighty Judas Priest – I’m sure many will think of him as a more controllable David Wayne with the ability to power those higher notes without fear of screech. My favorite song “Haunting Me” reverberates in my headspace due to the prominent Cory Betts bass line and the catchy as all get up chorus – no wonder it was chosen for a video track to promote this effort.

You also get two versions of “Old Skool Metal Dayz”, the second one that concludes the album features extended solo work from guests David Shankle, Ross The Boss and Jeff Watson. Overall this is an instantaneous listening experience, definitely for the fans of NWOBHM and acts that were on the cusp of the movement during the 1981-1984 period. Some might find their stance a little cliché or over the top – but I know plenty of people the world over live for the reverence Pegazus possess.

OLD WAINDS – Where the Snows are Never Gone