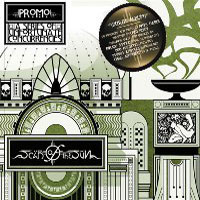 Sometimes first impressions carry a lot of weight when reviewers come into contact with new bands. Hate to say it, but album covers, band monikers, and song titles do give you a fair look at whether the band are serious with their content or if you fear pressing play and experiencing aural abuse. Forming in the UK, these Greek musicians set off my expectations in a good way when looking “A Series Of Unfortunate Concurrencies”, the debut album from this multi-dimensional atmospheric metal band. Infusing their gothic and Swedish melodic death-like sonic base with modern electronic samples, occasional doom parts and a multi-pronged clean/gruff vocal attack, one will not be bored by the 56 minutes of songwriting at hand.

Scar Of The Sun employ a guitar foundation that often has an echoing/pulsating nature to the main parts and rhythms – giving the main vocals that deep alternative/ clean nature not dissimilar to Burton C. Bell from Fear Factory if he careened headlong into some gothic bands. The title track for instance opens with a clean picking exercise against the back drop of opposite bass parts before kicking into gear with heavier, building distortion – then mutates with a wide open snare snap during the verses as the winding road takes you into a 7:27 arrangement that Katatonia or The Gathering followers salivate over. Drummer Achilleas has a progressive nature to his ideas – implementing a series of subtle off tempo cymbal/ snare shifts in “Burn The Memory” that keep you guessing as to where the song will take you.

Terry’s keyboard and programming aren’t overbearing- merely adding another shade to the atmosphere on stand out cuts like opener “Disposable” and “Ode To A Failure” (the latter contains fearsome death vocals as tradeoffs to Terry’s normal melodic/ alternative presence). The five piece aren’t afraid of even throwing in blast beats against doom riffs – somehow Scar Of The Sun really worked hard at synthesizing divergent metal elements to make them work for each arrangement.

There isn’t one specific band that comes to mind when taking in the entirety of “A Series Of Unfortunate Concurrencies”. Some of the harmonies are In Flames, a lot of the atmosphere conveys Paradise Lost, the rhythm section certainly studies from the altar of Swedish melodic death- but overall I find Scar Of The Sun alluring, heavy and necessary for the healthy development of metal in general.

Maybe in another 3-5 years with a couple more albums under their belt, they’ll be taking the metal scene by storm much like Katatonia and Opeth have in years past.

RHAPSODY OF FIRE – From Chaos To Eternity