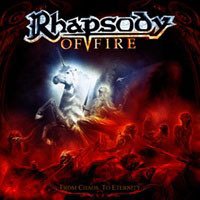 RHAPSODY OF FIRE – From Chaos To Eternity

It shouldn’t be shocking that these Italians are making up for lost time following their years in Magic Circle exile and record label / management red tape. “From Chaos To Eternity” quickly follows up another full length and 7 part “Cold Embrace Of Fear” EP that came out last year. Guitarist Luca Turilli felt the time was ripe to scale back a little on the bombast elements and let the guitars blaze and shine – giving material like “Tempesta Di Fuoco” and “Tornado” more of a heavy metal with speed feel. A surprising aspect comes to the forefront in terms of darker screams and blast beat passages through “Aeons Of Raging Darkness” – a power number with this foreboding sense of anger that gives the listener something unexpected in Rhapsody Of Fire’s trademark symphonic laden sound.

The album ends on the long 19:38 epic “Heroes Of The Waterfalls’ Kingdom” – once again featuring the powerhouse narrative skills of Christopher Lee. The musical opening is very folk / Irish sounding with acoustic guitars, flutes and string passages – with Fabio alluring in his native Italian lyrical prose. Around the 3:22 mark keyboardist Alex Staropli takes over with his layers of classical / theatrical chord structures and the song bounce between Iron Maiden-like epics and conventional Rhapsody battle fare. My favorite section of the song occurs around the 8 minute mark, when bassist Patrice Guers mirrors the Turilli / Staropli solo line while Mr. Lee sets up the scene with his dramatic delivery. I wouldn’t say it’s their best epic song ever, but at least there’s enough ebbs and flows, highs and lows to keep you interested.

When you are on your ninth studio album and over 15 years recording full lengths, it’s difficult to really dissect what makes one album special in comparison to the others. As such “From Chaos To Eternity” doesn’t veer off this band’s stock style and signature sound – they just willingly add new, darker nuances and this could improve with more seasoning and careful construction.

GRAVEWURM – Blood of the Pentagram