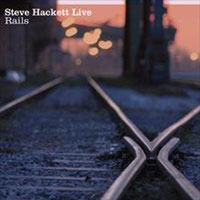 Recorded over the 2009/2010 touring schedule in the pristine cities of Paris, London and New York, guitarist/vocalist Steve Hackett releases a double live set spanning his work in Genesis and his vast solo progressive rock career. Featuring 6 songs from his 2009 “Out Of The Tunnel’s Mouth” album, you’ll also find Steve going back to his 70’s recordings with 1975’s “Ace Of Winds”, “Every Day” and “Clocks” from 1979’s “Spectral Mornings” as well as famous Genesis epics like “Firth Of Fifth” , “Los Endos” and “Blood On The Rooftops”.

Backed with a five piece group who include Rob Townsend on sax and woodwinds, Amanda Lehmann on second guitar and bassist Nick Beggs, “Live Rails” relies on the softer, emotive side of Steve Hackett’s songwriting and playing skills. “Fire On The Moon” for instance opens with psychedelic, dream-like verse overtones before the chorus kicks in with this Gilmour/Pink Floyd sonic overview. “Fly On A Windshield” contains Hackett’s trademark weeps and bends, emulating the title of the instrumental. “Ghost In The Glass” explores his jazz side, the keyboards and sparse percussion giving Steve free reign to create with tenderness and excitement all the same.

There are just as many vocal-led tracks as there are instrumentals on “Live Rails”, so prepare yourself accordingly. I for one wouldn’t have minded hearing a track or two from the fine “GTR” album, but it’s got to be tough satisfying every long-time progressive rock fan when you’ve been playing this style for over four decades now. If you haven’t kept tabs on this man’s legendary work within the progressive rock community, “Live Rails” may encompass a great cross section for you to investigate.

KORN – III Remember Who You Are