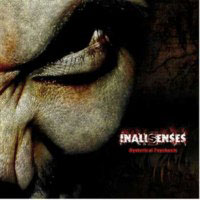 “Hysterical Psychosis” is a 2010 album by In All Senses, it leads its listeners into a state of calm anticipation with “Last Breath” before “Red Line” awakens its victims in some kind of after life. With rapid, crying guitars, fast paced drums and lead vocals belching out the lyrics in any way possible “Red Line” is a early highlight for “Hysterical Psychosis”.

The madness continues with “They Suck Your Soul”. This is a fast paced, metal track meant to get the adrenaline pumping and the heart beating faster. Following an amazing album opening, easily putting “Hysterical Psychosis” in the running for best metal album of the year, the tracks starts to lose their appeal. It is still metal as f**k yet it does not exhibit the same insanity the listener could inherit from the first few tracks. The album might have entered a coma, you may have lost all hope but right when you are about to pull the plug, enter a hero. “Psycho Killer” pulls “Hysterical Psychosis” out of purgatory and nurtures the album back to life. With a ‘sure to excite’ rhythm and casual sing-a-long bits, this is a track for the play lists.

With highlights like “Red Line”, “Last Breath”, “War and Death” and “Psycho Killer”, In All Senses deliver a strong album, sure to satisfy any metal head’s yearning desires. This is the album for people who like their metal fast, consistent and safe without being too repetitive.