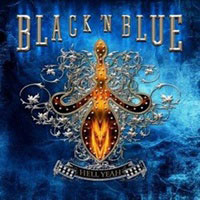 In my second year of going to shows, I witnessed Kiss on their “Asylum” tour sans makeup. Opening on that leg in support of the band would be Portland, Oregon’s Black ‘N Blue – and now thinking about this concert 26 years later, I had a better time listening to songs from their first two albums than all of the solo spotlight chicanery Kiss displayed that night (4 separate solo segments in a 105 minute set?). Gene Simmons would involve himself in Black ‘N Blue’s latter 80’s days – and even took Tommy Thayer to finally join the reunion makeup madness years in the “Ace” guitar slot.

“Hell Yeah!” started in the writing stages during 2003-2004, but took a slight backburner turn as vocalist Jamie St. James got the chance to front Warrant for a few years between Jani Lane stints. With 4 out of 5 members back for the reunion (new guitarist Shawn Sonnenschein taking over for Mr. Thayer), this album appears to fall in line with their early catalog and a sprinkle of Aerosmith meets Led Zeppelin for old school inspiration. “Monkey” builds up with an old school Cinderella-like bass/drum intro before bursting with a blues-infused hook riff and multi tracked harmonies from Jamie and the boys that prove their prowess in the hard rock field. “Target” on the other hand straddles the fence between a Stone Temple Pilots main riff and a bridge/ chorus that fall more into favor with latter day Winger – evoking a call and response atmosphere between the music and vocals.

When the band decide to step away from the energetic traditional hard rock and throw down a semi-ballad like “Fools Bleed”, there’s a depth and understanding to not go for the easy heart string keyboards or safe love lyrics, taking their cue from a lot of their 70’s hard rock mentors. There are a couple of shorter intros that border on filler like the 54 second “Jamie’s Got The Beer” and “Trippin’ 45”, but overall the main 11 song record crawls into your brain as if Black ’N Blue didn’t take two decades plus away from the music business.

By the time you hear the Middle Eastern instrumentation strains on “World Goes Round”, you get the feeling that Black ‘N Blue made “Hell Yeah!” strictly for their own spirit and enjoyment – and the bonus is, it’s delectable for their long standing fans as well.