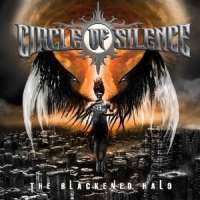 CIRCLE OF SILENCE – The Blackened Halo

German five piece who have garnered strong media support for their two previous releases since their 2005 formation. “The Blackened Halo” is my initial sojourn into this five-piece and their heavier, power metal style – focusing on dual rhythm/lead guitar riffs instead of pumping in keyboards. Vocalist Nick Keim has a unique timbre to his melodies as well as that slightly aggressive roar that separates him for the conventional Dickinson / Dio delivery and more in the Peavy Wagner / Rage mold.

The opener “Synthetic Sleep” bursts from the gates with Peter “Pit” Suppinger flexing his double bass muscles and a mixture of power, thrash and harmony riffs from the Tobias Pfhal / Christian Sommerfeld axe tandem. “Left To Die” as a follow up is the mid-tempo head banging number, focusing on a direct audience interactive chorus and streamlined riffing with an outer world, echo-like solo. The rest of the album alternates between faster efforts that straddle the Metalium / Mystic Prophecy philosophy such as the title track and “Never Forget” while the mid-tempo, more anthem oriented songs like “Take Your Life” or “Redesign” contains those trademark rhythms and traditional drum movements more closely associated with the 80’s/ early 90’s Grave Digger or Rage.

I must admit Circle Of Silence took me longer than normal to understand – which may make it a tougher, up hill climb in terms of sustainable throngs flocking to their records. There’s something about the songwriting that isn’t quite up to the level of their influences – they are on the right path, I just feel they need to infuse more dynamics and contrasts to make the arrangements and hooks that much more outstanding. With over half the album hitting my senses the right way, I’ll err on the side of good and believe their next record will push the band in their own power metal niche.

LABRADOR – The Intruder In Your Eyes