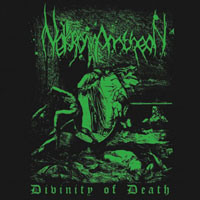 In 2010 the three piece band Nekromantheon from Kolbotn, Norway released "Divinity of Death", the follow-up full length album to their 2007 "We’re Rotting" EP. It is limited to 500 copies on vinyl, where 150 of them are splatter-green in order to match the albums artwork. Early 2011 the "Divinity of Death" became available on CD through Duplicate Records.

Nekromantheon play straight-in-your-face-fast-and-brutal-thrash in 100 mph with a good dose of midtempo riffs which are doomed to fuck up your neck. Even in this blitzkrieg of speed, savagery and brutal, raw vocals there’re still a lot of melodies and riffs that stick out and get stuck on your mind long after each listen. Not to mention the awesome drumming from Kick, which is untouched when it comes to Norwegian thrash metal…, his rapid speed and razor sharp precision lifts the album to a new level. Guitarist Arild and bassist Sindre shares vocal duties and for those of you who are familiar with Obliteration (main band of Arild and Sindre) you’ve heard what Sindre is capable of – pure brutality is spewed from his throat, while Arild’s style is more raw. This creates a form of dynamic that isn’t used that much in thrash metal.

If I were to compare "Divinity of Death" to something, Slayer’s "Reign in Blood" is the first album that comes to mind. "Divinity of Death" doesn’t contain a single filler riff or filler song. Other than that it is clear that the guys have been listening to a lot of old Sepultura (with the reference "Nekromantic Troops of Doom" sung in the opening song "Gringo Death"), Kreator and Death to mention a few. While it isn’t hard to hear the band’s inspirations, Nekromantheon isn’t one of "romantic" thrash bands you see all over the place (especially in the States) that try to sound like all the cool bands from the 80s. They’ve got their own style and sound. Put on something they’ve done, whether it’s from their EP, the full-length or any of their split 7"s you’ll immediately hear which band it is.

I don’t have words for how good the production is. They’ve managed to keep that old raw thrash feeling from the 80s, yet it is clear at the same time without getting all sterile and soulless like the material most modern thrash metal band’s today releases. The lyrics are mostly about killing, war and destruction although I’ve read that they have a lot of Greek mythology themes in their songs. "Divinity of Death" ends with the whiplash inducing "Alcoholy Terror": "Alcoholy Terror, Drink ’til they’re dead. Alcoholy Terror, Bang your head!" Cheers! By the way, did I mention how fucking fast they play? The album consists of 11 songs which clocks in at 31.07 minutes.

This is the album Slayer whished they had released in 1986. "Devolutionary Storms! FUCK!"