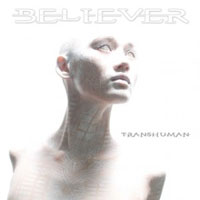 This is not the Believer of my youth. Back in the days when “positive/Christian” metal had as many skeptics as pure followers in the 80’s and early 90’s, this Pennsylvania band gained a major buzz for their progressive thrash stance while not overly Bible thumping with their lyric content. After a decade long plus hiatus, 2009’s comeback “Gabriel” delivered a more modern approach in terms of industrial and alternative influences, laying off of their previous faster nuances which many embrace while leaving others perplexed. “Transhuman” continues in this domain, although slightly more progressive in terms of the arrangements, riff changes and Tool-like drum movements.

Take “Multiverse” for example. Drummer Joey Daub throws his heart into the kit, juggling the snare, toms, cymbals and floor bass work with all the skill of a progressive rock expert – and then you have the computerized keyboards and heavily distorted vocal approach from guitarist Kurt Bachman that almost eerily conveys affinity for Jonathan Davis. “Transfection” begins with a quirky programming, xylophone-like riff that mutates into an off-time riff shaker- the atmosphere of this song rivaling Nine Inch Nails with Voivod. There are flashes of the speed bursts from Believer’s past- “Clean Room” showcasing that thick chug-a-thon spirit along with “Ego Machine”, the latter also reliving the desperate tone to Kurt’s melodic phrasing.

I respect Believer’s commitment to not stay stagnant and offer up the same record throughout their career. “Transhuman” however doesn’t move me like “Sanity Obscure” in 1990 – the emphasis on industrial and computer programming takes away from the progressive and metallic elements I prefer from this band. I guess loyalties lie with a more organic record rather than the waves of sound coming at all angles.