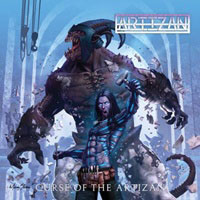 ARTIZAN – Curse Of The Artizan

When you follow the scene for decades as I have, you find certain members who may have fallen off the face of the earth… only to return smarter, wiser and with more seasoning to take another crack at glory. Such would be the case for vocalist Tom Braden, who if you remember the progressive/ power metal movement from the late 80’s and early 90’s was the singer for Colorado act Leviathan. Now residing in Florida, he returns to the scene with the quintet Artizan, a melodic metal act that have quickly taken the internet world by storm and with good reason after an initial 3 song EP setting up their debut album “Curse Of The Artizan”.

It takes quite an album for me to place on repeat mode for days on end – but since receiving this I‘ve been hard pressed to listen to anything else. Songs like “Trade The World” and “Fire” have that power and progressive galloping atmosphere that keeps my ears pinned for something spectacular with every unique listen – be it the professional guitar team play from Shamus McConney and Steffen Robitzsch or the forceful, propelled drumming of fellow ex-Leviathan member Ty Tammeus. Other songs contain melodies and chorus work that I swear weaves in and out of my awakening states, such is the magnificence of the soaring, multi-octave comfort from Tom in “Fading Story” and the closing, close to ten minute title track. The best song probably is the most commercially viable (in terms of it’s 4:27 timeframe) “Rise” – mystical melodies through the verses merge into an addictive hook repetitive chorus while the guitar work works off of a straightforward power riff and soloing that neo-classical maniacs will deliver horns in air salutes to.

There are touches of Queensryche and Iron Maiden in Artizan’s sound – but I also believe they have that progressive insight and technique behind much of their material that truly separates them from their contemporaries. Topped off by Marc Sasso‘s fantasy cover art and the stunning production from veteran knob twister Jim Morris at Morrisound Recording “Curse Of The Artizan” could be the start of a prosperous career for this group – its exciting and contains numerous elements that should reach a wide cross section of metal followers.