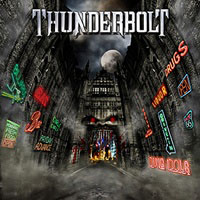 I wondered what happened to this fine Norwegian traditional metal five piece, as it’s been five years since their last album “Love And Destruction”. They haven’t been idle on the live show front, gigging throughout Europe on tours with Sabaton, Paul Di’Anno and Tim “Ripper” Owens – so it’s an appropriate time for “Dung Idols” to possibly catapult these gentlemen to a larger audience. Usually third studio records are the best barometer for whether a group will have a long, successful career or need to shuffle their priorities elsewhere – so it’s time to dig in and analyze this crucial recording

The initial blast of “Fight” has me thinking mid-tempo set mainstay, especially with the prominent riff and chorus work being a distant cousin to “For Whom The Bell Tolls” off Metallica – while the solo parts from Geir Marius Halleland and Per Erik Holt rival the best Smith/ Murray days of 1982-1988. Tony Johannessen vocally belongs in the top 10% of classic traditional vocalists – he has the lung capacity and low to high register one expects from Bruce Dickinson and Michael Kiske, along with the personality and phrasing to be easily accepted and convincing to the most discriminate listener. Best examples include the up tempo “The Moderators” and “Somewhere In Time” era-like “Metal Tide” to check out his impressive power and melody knowledge. They also have a great balance of flashy guitar heroics along with writing some killer, memorable material – “Land Of The Living” for instance has that over the top extended ending while “Heel Run” has that steady drum gallop that wins you over and keeps you coming back for more.

Even those in the know will dig deeply into the similarity to Iron Maiden’s intricate, detailed front covers with Thunderbolt’s latest. I do think the years of performing in the trenches with a variety of new and seasoned metal acts have prepared Thunderbolt for ascension to higher levels based on these 10 songs. To those who wonder where traditional metal will go for the future, “Dung Idols” would be a good benchmark to own.