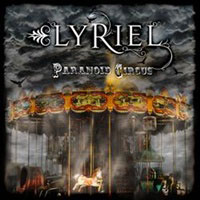 German gothic metal sextet who gain a re-release of their third album “Paranoid Circus” due to the limited issue of this record through London based Femme Metal Records. This should prepare the listeners for the fourth studio platter, due to hit the streets this fall. These 17 tracks contain 11 proper songs, 2 bonus tracks (an orchestral version of the title track and a remix of “The Regret”) plus 4 subtle interludes to keep the album flowing in the proper direction.

Lyriel’s style does have prominent folk influences, using violins and cellos to create the Middle Ages/ medieval spirit on stand out tracks such as “Like A Feather In The Wind” and “The Wolf” among others. The female vocals have an ethereal meets classical appeal, appropriately gentle on a ballad such as “Lullaby” while traversing Celtic melodies on “The Wheel Of Fortuna”. Nothing is overly bombastic about their approach – I believe the instrumentation and arrangements remain keyed in on simpler, to the point parts that emphasize hooks and journey to earlier lands.

“Paranoid Circus” isn’t a weak album by any means- it just meanders into too many mid-tempo and ballad moments for my normal gothic metal leanings. “The Regret” remix that closes the album veers too much into techno-dance club nonsense that would have been better off appearing on a single or internet only release. Maybe in a live arena Lyriel can enchant and enrapture with these songs – I just feel that this record contains familiar strains that didn‘t leave me with jaw dropping enthusiasm but rather an apathetic response.