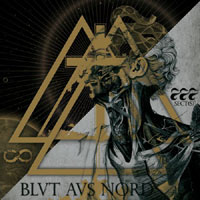 Where Deathspell Omega spent ca. 9 years making their trilogy, Blut Aus Nord spend like 9 months. And if the two following parts to "Sect(s)" are on par with the first part, then I predict that Blut Aus Nord’s trilogy will stand strong as well.

On the more technical aspect, the drums are machinemade, the guitar sound is clear in its ugliness and what the vocals lack in power they uphold in the insane-department. I would’ve preferred a stronger drumsound, if I could decide, but having listened to the album quite many times now it doesn’t annoy me anymore. In fact, the sound of drums melts with the distortive razors more known as guitars. Where the said Omega is chaotic and furious, Blut Aus Nord’s more controlled rage sticks needles into your body by the same use of almost out-of-tune guitars. Can’t they hit the strings where they’re supposed to? Irony aside, "777 – Sect(s)" does something to you, whether you want it or not. You simply cannot be unaffected by the sickness therein, nor can you avoid to be drawn into the universe of epitomes. A play of word on the song titles, yes, but also a more direct approach on the music, since Blut Aus Nord choose to alienate you with strange melodies, with a vocal that is monotonous and really harsh, yet at the same time almost whispering. Vindsval sings with his soar throat with the result that I don’t want to stay in the same room for too long. I want to leave. But, it’s like he stands on the other side of the door, holding it back when I try to open up and leave.

We are not welcomed in the land of Blut Aus Nord. But we are not allowed to leave.

There are not that much vocalwork on this album. That’s fine with me, since the music has that hypnotizing dreamlike effect on me at the same time as it has plenty of interesting sections. The combination of the said out-of-tune like guitar and the drum pattern in the beginning of "Epitome 6", is really intriguing. Seconds pass by and I’m still there, being one with the music. It speaks in distorted tongues. The highlight for me though, is the amazing "Epitome 4". A close to 12 minutes epic where the choir-like vocalwork towards the end is the work of a genius. Haunting guitars and alienating  "aaaaaaayyyyyyy"… That this reminds me slightly of my favourite band Deathspell Omega, is definitely not a drawback.

Blut Aus Nord has created an situation where I’m content with the hear-and-now for now. And, that I’m of course curious on the two other parts of the trilogy on life and death.