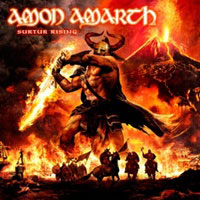 I must admit a distance from this Swedish Viking metal group for a number of years. Hearing about them in their early Pulverised Records days, back when they were a pure death metal band, I lost touch with their records until catching up with 2008’s “Twilight Of The Thunder God”. I appreciate their intensity and work ethic, as they really espouse a fan perspective when it comes to their packaging, artwork, productions, performances and extras in terms of bonus material and DVD’s.

Now the highly awaited follow up “Surtur Rising” sees the five piece in an unfamiliar territory – a superstar band with headlining status on multiple continents, which could lead audiences to think that Amon Amarth are suddenly going to shift course for much easier, commercially laden pastures. One exposure to the low bellow of Johan Hegg on opener “War Of The Gods” tells you that even though Amon Amarth have shifted to more traditional, epic sounding waters with their musical framework, his death voice delivery will always keep the band away from casual, fickle fan acceptance. The production work of Jens Bogren does have a rawer , almost live quality to it compared to its predecessor, giving songs like “Tock’s Taunt” and “For Victory Or Death” that contrast between bright cultural guitar harmonies and punishing, warrior-like attack coming from the bass and drums. Even “Destroyer Of The Universe” brings Amon Amarth back to their early death roots, a tip of the cap to both the Stockholm and Gothenburg scenes with this speedy effort.

There isn’t anything about “Surtur Rising” that screams out instant classic song – it’s one of those albums that sweeps you off your feet with continual exposure and deeper reflection. They’ve created their own traditional meets Viking death metal sound, fortifying their style with deep mythological lyrics and while many may cry about their lack of ‘development’, to me if it’s not broke, why do you need to tinker with success?

URIAH HEEP – Into The Wild