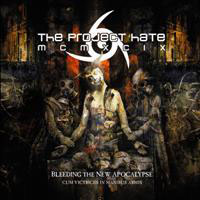 There are few bands I can think of with a higher consistency of strong releases then TPHMCMXCIX. They entered the scene in 2000 with a bang. Their debut “Cyber Sonic Super Christ” still is frequented on my stereo to this day. Still, with a kick ass back catalogue TPHMCMXCIX has had some ups and downs. It’s only a matter of details that make some albums more favorable, but since TPHMCMXCIX has stayed true to their formula with dictatorial conviction, details are what separate the albums. Thusly the details are very much important in TPHMCMXCIX’s case.

Their first album was killer, but their sophomore album was somewhat a disappointment. It felt like a repetition of their first album, sans the identity. Luckily they came back strong in 2003. “Hate, Dominate, Congregate, Eliminate” is my personal favorite, and it still is to this day. Next album out, 2005’s “Armageddon March Eternal (Symphonies of Slit Wrists)”, was again disappointing. With their paradigmatic formula TPHMCMXCIX again appeared self-repetitive and uninspired. The two last albums, “In Hora Mortis Nostrae” and “The Lustrate Process”, have shown TPHMCMXCIX at its best though. Both albums had an identity of their own and sounded both fresh and inspired.

Now, for this year’s album, “Bleeding the New Apocalypse (Cum Victriciis In Manibus Armis)”, does TPHMCMXCIX follow the promising path of its two predecessors? Sadly, I am not convinced. The production is good, the melodies works, but the material is repetitive and uninspired. This time around I feel that most has been done before. The right details have not been extracted to give this album the strength it needs to stand on its own. Instead the female vocals have been given more prominence, which I find unfortunate.  The female vocals have always worked in TPHMCMXCIX’s favor when utilized as variation catalyst. Splitting the vocal work 50/50 between growl and female does not work as well. As a singular release by a death metal band, “Bleeding the New Apocalypse…” would be a good album. But I expect more from TPHMCMXCIX. Many places this sounds like regurgitation of their two last albums.

Since this is a matter of details, some might of course find the prominence of female vocals to their particular liking. My verdict is the following: Nice try, better luck next time. If this is your first encounter with TPHMCMXCIX, I suggest checking out “Hate, Dominate…” or “The Lustrate Process” instead. But be sure to check this band out. In my opinion they are strongly underestimated and deserve more attention than they have gotten so far. TPHMCMXCIX, for the most part, kick some serious ass.