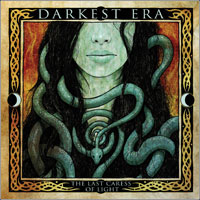 Forming in 2005 under the name Nemesis, Darkest Era have slowly crawled up the ranks of festival appearances and a couple of demo/ EP releases in the ensuing 5 plus years. The style of choice is Epic Celtic metal from this Irish quintet on their debut album "The Last Caress Of Light". Teaming with cultural Irish melodies through the rhythms and harmonies, songs like “An Ancient Fire Burns” and “Visions Of The Dawn” stir up memories of Warlord, Iron Maiden and of course the heroes Thin Lizzy. Vocalist Krum projects his delivery as if standing from a mountain-like pulpit – unafraid to belt out highs or carry out trailing notes for more than 10 seconds.

Five of the eight tracks pass the seven minute mark, so prepare for longer arrangements that aren’t necessarily progressive as they are brooding and occasionally doom enhanced. Guitarists Ade Mulgrew and Sarah Wieghell approach this material with reverence and taste – they understand when to take the mood down to cleaner pastures and also know how to build up the energy for emotional, twin guitar outbursts – with the best example being “To Face The Black Tide” where they carry the melodies during the chorus. They explore an acoustic pagan tact with “Poem To The Gael” – showcasing their deeper, historical lyric scope much like many of their sonic influences.

I’m fairly certain Darkest Era will never become a household name in the metal genre. That makes no matter to true followers of epic traditional, doom-laden metal. "The Last Caress Of Light" recalls a time period pre-internet and pre-video domination, where vinyl cover art mattered more in determining your risk tolerance for a new metal album as you didn‘t always get to hear samples or radio cuts. This will be an album that gains greater depth ten or twenty sessions in – please allow this great band the chance to sink deep into your mind, body and soul.

NECROS CHRISTOS – Doom of the Occult