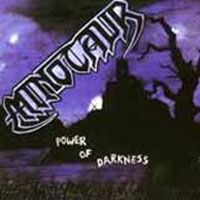 22 years later the debut album from this extreme German thrash band Minotaur resurfaces. Those who plummet into the underground know there was more to the Teutonic movement than Destruction, Kreator and Sodom – as acts like Darkness, Protector, and Poison (yes, the thrash band, not the glam act) carried their wares onto an audience craving the most violent and disruptive forms of music known in the mid 1980’s. The three piece Minotaur belong in that latter class of bands – commercial aspirations were the furthest from their minds with 1-2 hyper speed offerings like “Maggots In My Body”, “Fierce Fight” and the Slayer-esque “Praise Hell”.

Guitarist Andreas Richwein roars through the verses and choruses like a younger Mille caught in a stomach vice grip. Musically his compatriots (bassist Alf Diehl and drummer Jorg Bock) create a sound much in line with European brethren like Cyclone or possibly Canada’s Sacrifice – the thought process being an all out raw assault of your ears in the hopes that you could enjoy the drive and energy delivered from their instruments through your speakers. They weren’t going to dazzle you with the most flashy, in key solo parts or even know how to vary much of their arrangements. That’s evidenced on their 2009 interpretation of Def Leppard’s “Wasted”, as they bump the original drum tempo about 20 notches and make this more of a speed metal song than what I originally remember of this "On Through The Night" classic.

Angry and uncompromising, "Power Of Darkness" will be one of those albums the new thrash brigade should check out to remind them to focus on killer content over anything image or trend related when it comes to music from your heart.