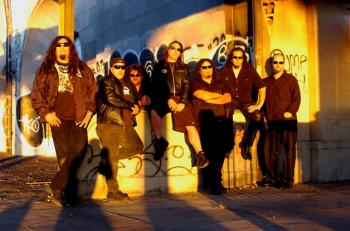 We’ve got a thrash surprise for you that’ll really blow your minds. With Testament’s Chuck Billy and former Exodus vocalist Steve ‘Zetro’ Souza, the DUBLIN DEATH PATROL combines the vocal chords of two of the Bay Area’s most prolific singers. The rest of the lineup varies depending on who’s available, but with guys from the likes of Lääz Rockit, Tesla and Vio-Lence you can’t go wrong. Into the pit! (Sunday 26 June)

ALL SHALL PERISH is definitely a band with balls. This Oakland, California quintet have been churning out brutal deathcore according to the same recipe for a number of years now. The band is releasing a new album this summer on the heels of two successful tours, so this was the perfect time to invite these guys to our festival. Lightning-fast double bass drums, top-notch screams and an ass-tight rhythm section: if that doesn’t spell "mosh it up", we don’t know what does. (Saturday 25 June)

Created on the streets of London in 2008, RISE TO REMAIN, a five piece metal band storming from the heart of the UK, have begun to make their mark. Having toured with bands such as Trivium, Five Finger Death Punch, Shadows Fall, The Haunted, the band are no strangers to the live circuit. Citing influences from all corners of the metal spectrum, the band play their own brand of melodic metal with tinges of thrash and rock. Keep your eyes on the horizon, because Rise To Remain are coming to get you…on Sunday 26 June.