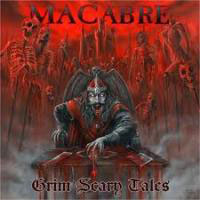 Macabre is an extreme metal band from Chicago. They have kept on going since 1985 and are performing what they themselves call “murder metal”. How this band has eluded me is no surprise at all…

The band plays some variation of horror-infused metal. Horrid atmosphere and humor are the tools of Macabre’s trade. A trade they fail to exceed in on most accounts. As far as musicianship go, Macabre appear to have quite experienced members, which they should be after more than 25 years in the band. Still, most of the songs are highly repetitive and filled with awful transitions in tempo and allover song structure.

This could have been overlooked though, if the horror atmospheres and humorous attempts were working. To me this is neither funny nor scary in any kind of way. If you want horror metal I suggest you try something like The Vision Bleak or Morgul instead.

The singer is also an Achilles heel for the band with his ridiculous attempts to sound scary. It reminds me a tiny bit of King Diamond sometimes. If Mr. Diamond is your favorite singer and Mercyful Fate gives you shivers of horrific joy, you might get something out of this one. Approach with caution though…

COLDSPELL – Out From The Cold