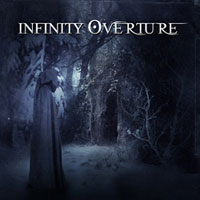 Danish progressive metal quartet Infinity Overture make a slight shift with their sound on this second album "The Infinity Overture Part 1". Their "Kingdom In Utopia" debut of 2009 features a more symphonic-oriented quality, along with the blistering neo-classical lead play of guitarist/composer/ producer Neils Vejlyt. Following a lead singer shake up, Kimmie Tenna Nielsen gives Infinity Overture more of a palatable, radio-friendly sound as her voice evokes power and gothic charm at the same time.

Neils’ tone and attacking nature reminds me of David T. Chastain on tracks like “The Hunger” and “Evernight”. Guest vocalists Fabio Lione and Amanda Somerville lend their expertise next to Kimmie on certain cuts, allowing the lyrics and melodies to shine bright against the music arrangements. There are times where I feel Neils’ could tone down his neo-classical arpeggio wankery, as the prolonged solo for “The Stand” just becomes a steady stream of note flurry signifying little more than show off ability. And the male growl parts detract from the style – it’s like attempting to fit regular auto tires on a tricycle.

I would say these 9 songs launch me to the territory of Lacuna Coil plunging headlong into Yngwie Malmsteen/ early Symphony X – a meld of furious instrumental parts and streamlined, hook-filled verses and choruses. This is another album that I need to be in the right mood to fully appreciate  – there’s nothing dazzling about what comes out of my speakers and the melodies are predictable at best.