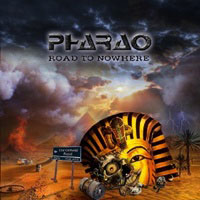 Forming in 1986, this German quartet have a roller coaster history without much recorded output to show for their long years in the business. "Road To Nowhere" is their second album, a follow up to their debut album that hit the streets in 1990! Splitting in 1991 and reuniting in 1999 for a special concert, more health problems for vocalist Jacky Lee Man put the full active Pharao dream on hold again until 2003. It’s not as if the band members have been idle in the metal business – as many are involved behind the scenes with festival work and production duties.

Now is the time for them to regain exposure with these 12 songs of energetic traditional metal with power and conventional hard rock leanings. Songs like “Mother Earth” and the title track have their roots in the late 70’s to mid 80’s straightforward movement – it’s all about lean guitar hooks, catchy chorus work and rhythms that instantly retain a lock on your brain waves. Guitarist/ keyboardist T.R. Yong lays down some tasty, melodic solo work on ”Like A Phoenix” and receives some complementary support out of Saxon guitarist Paul Quinn for “We Are” and “Seven Seas”.

Other special guests include Biff Byford for “On The Attack” and Sodom’s Tom Angelripper during the deeper verse bellows within “Before The Storm”.  As far as main vocalist Jacky Lee Man, his natural high range may not necessarily be classified within the norms of heavy metal, but I think his charm and passion will win most of the critical ones over. In fact, the only song I thought would be better left on the cutting room floor would be the closing cover “You Ain’t Seen Nothing Yet” – originally recorded by Bachmann Turner Overdrive. This one sounds more like a demo with simplified electronic programmed drums and unnecessary vocal effects.

Pharao lives for the heavy metal fight, so those who want meat and potatoes substance will enjoy "Road To Nowehere".