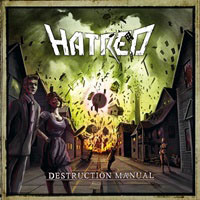 In 2010, you would think that thrash metal never has gone away. Artists long in the game as well as a second generation of musicians appear intent on pushing their riffs, windmills and aggression on audiences all across the globe. Germany’s Hatred have been involved in the scene since 1998 – and now release their third album "Destruction Manual" as this quintet have plenty of the old school philosophy in their approach and songwriting ethics through these 11 songs.

Vocalist Bacchus (Mathias Mauer) has an acidic roar and sometimes has to push hundreds of words out in a rapid fire manner on a song like “Porker’s Revenge” much as Steve “Zetro” Souza or Keith Deen used to employ during their respective early Exodus/ Holy Terror years. The tandem of Maddin and Kort on guitars level the listener with a thick riff assault, synthesizing the best of West Coast and East Coast thrash along with their domestic panache. There’s no doubt with tracks like “Ratter Of Hell” and “Metal Bastards” Hatred love their Overkill, Testament and Exodus when it comes to influences.

The snare sound has that tin can ping quality that may appeal to the natural sonic fanatics but I feel weakens the impact of tracks like “Run Amok” and “Speak Of The Devil”. They also lose me when the solo sections become a cacophony of note runs with no rhyme or reason towards the song’s structure or tempo. At this point in the game if Hatred expect to sustain an ardent group of supporters, they need to emphasis all aspects of sound and production to keep up with the plethora of releases flooding the marketplace.

There’s enough here to keep me interested in future releases – so let’s hope these gentlemen hunker down in the rehearsal space and really work on some electrifying material for the follow up.