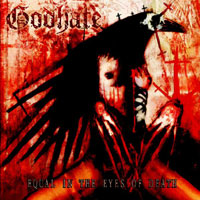 GODHATE – Equal In The Eyes Of Death

When first listening to this last release by the Swedish death metalers in Godhate I was ready to dismiss it quickly. But something made me want to hear it again… and again. I can’t put my finger on what it is, but after repeated listening I grew to enjoy this quite a lot.

Godhate perform straight forward death metal. If trying to describe their style, I would describe it as something between Polish death metal and Greek death metal. I can recognize elements similar to Behemoth and Decapitated as well as Nightfall and Septic Flesh. The riffs are performed with surgical precision. The sound is gritty and dark, and the melodies are also quite memorable.

So why isn’t Godhate rewarded with a higher score? I guess I feel that the band lack an identity of their own. I enjoy the songs and the technical proficiency. There is no denying that this album is a product of quality. Nevertheless, I wouldn’t exactly remember this music as Godhate as much as I would recognize it as a good death metal album with many other similar products on the market. It doesn’t stand out enough for me.

The tracks “Godhate”, “Alla Xul Kanpa” and “Antichristianity” are my favorites on the album. With a little bit more distinctiveness and more melodies as these three, Godhate will definitely get a higher number on the dice the next time around. Still, this is without a doubt a good album. So if you like the other band’s mentioned earlier in this review there is no reason not to check out “Equal in the Eyes of Death”.

CHAPTER OF HATE – Chapter of Hate