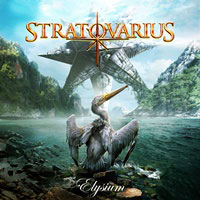 In today’s rapid fire culture, you may only be as good as your last product. If you wait too long, your chance may be lost in gaining the most eyes and ears to latch onto. Finland’s Stratovarius are overcoming a huge loss with founder Timo Tolkki by releasing their second album since his defection. 2009’s "Polaris" gave the band the chance to remind long time followers that they were ready to go back to much more conventional power waters – with "Elysium" being the benchmark for everyone to trust Stratovarius as an entity that can be relied upon as much as they were during their mid to late 90’s popularity heights.

Guitarist Matias Kupiainen feels comfortable as a player and songwriter within the band, exuding the chops and melodic feel all ardent fans expect through tracks like “Under Flaming Skies” and the monumental 18 minute plus three part title song. Vocalist Timo Kotipelto remains one of the more sincere, distinctive voices in the business, not coasting on his past accomplishments and still comfortable going up and down his register be it for the first single “Darkest Hours” or ballads such as “Fairness Justified” and “Move The Mountain”. For those inclined to hear the axe/symphonic neo-classical speed chases from keyboardist Jens Johansson and Mathias while drummer Jorg Michael keeps his feet and hands in overdrive – “Event Horizon” will be your new delight to cheer for the year.

"Elysium" contains all the qualities that made me a believer in Stratovarius in the 90’s: individuality and comfortable flexibility in terms of slower, mid-tempo and fast paced songs with a full professional production. The overblown thematic aspect on the "Elements"-records is no longer a going concern. They’ve latched on one of the best tours possible with Helloween for mainland Europe this go around, so the stars should align for their ascent back to the trusty veteran mantle.

It’s as close as we’ll get to "Visions" without replicating the pinnacle Stratovarius studio album – well done gentlemen!

TNT – A Farewell To Arms / Engine