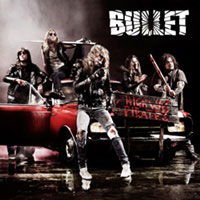 The return of Sweden’s Bullet for their third album of down and dirty heavy metal – "Highway Pirates". This quintet aren’t recreating the wheel – you can expect 10 more tracks relating to drinking, wild driving, women and reveling in heavy metal appreciation. The guitarists love Accept, AC/DC and Judas Priest the most in their twin guitar play through songs like “Fire and Dynamite”, “Knuckleduster” and “Citylights”. Hell Hofer continues to rumble through the lyrics as if he’s cut his throat with a razorblade after ingesting a couple of huge bottles of whiskey.

The years 1980-1984 come to mind the most when playing these songs – a spirit of live free, die hard and go out fighting against whatever society norms seem to be cast your way. Hampus Klang and Erik Alestrom compliment each other nicely, quietly laying down some Judas Priest-style lead action during the opening title track. The hooks can come from all angles – “Back On The Road” for instance has a gang-like chorus while Gustav Hjortsjo takes center stage with a steady hi-hat/snare groove and the follow up “Stay Wild” presents a bevy of killer Angus Young-ish speed blues riffs guaranteeing a rebel rousing live response.

In terms of their discography, I believe "Heading To The Top" still rates a touch higher than this album and "Bite The Bullet" – probably due to the similarity with the basic arrangements and songwriting. Sometimes I would love for an occasional breakout drum fill or even Hell Hofer to possibly sing a part without his patent shriek – but I doubt Bullet desire much re-tooling in their career. Essential for the early hard rock/ heavy metal maniacs, probably a late in the year look-see for everyone else.