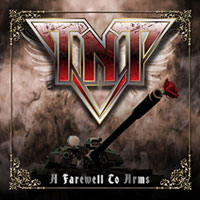 TNT – A Farewell To Arms / Engine

When taking a wide angle lens look at the three decade plus career of Norway’s TNT, one thing is clear: they haven’t been a group content to stay stylistically in one place. My favorite time lies with the early Tony Harnell years, namely 1984’s "Knights Of The New Thunder" and the American beloved follow up, 1987’s "Tell No Tales" – efforts that melded fluid guitar hero solo work with strong vocal hooks and melodic hard rock songwriting. The 90’s were rocky years as "Firefly" and "Transistor" saw guitarist Ronni le Tekrø keeping up with the current groove-oriented modern trends which didn’t meet with much fanfare from critics and long standing followers alike. In the 2000’s Tony would leave, giving Shy singer Tony Mills a chance to showcase his skill set but still not making that fervent comeback that we all know could happen with such a talented bunch of musicians.

Which brings us to the new decade and "Engine", the twelfth studio album and a much needed kick in the brain and behind for melodic hard rock maniacs. They took the audience opinion into account and out pop 11 songs (plus 1 bonus track “Harley-Davidson” recorded live as the European extra, differs from the Japanese bonus) rich in the early tradition of TNT. Songs like “Ship In The Night”, the heavier

“Come” and “Don’t Misunderstand Me” have those penetrating melodies and incessant guitar hooks that just know how to catch you and warm you over like sunsets peering over the horizon. Ronni uses his axe appropriately, asserting himself when he puts on the full array of speed picking tricks (which remind me of his Michael Schenker/ Gary Moore roots) and when to just lay back for the arrangement’s sake. My favorites include the opening title track which contains a similar, low-tuned main riff to 80’s period The Scorpions and the vocally penetrating “Barracuda”.

If anything, "Engine" has a lot in common with Intuition meets "Tell No Tales" – as Tony Mills reaches for those higher harmonies with the grace of a veteran and you’ll even hear a late 60’s Beatles reference with “God Natt, Marie”.  This is a worthy record if you’ve been lost in current TNT ever reviving their career. This is entitled "Engine" in Scandinavia and "A Farewell To Arms" in the rest of the world.