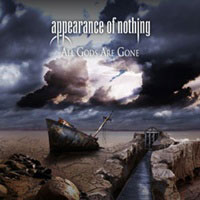 APPEARANCE OF NOTHING – All Gods Are Gone

If there’s one country in the world that produces high quality original metal acts through the years, Switzerland seems to come to the forefront of my mind. Celtic Frost. Coroner. Even Gotthard who flew the flag for conventional hard rock when it didn’t seem as cool in the 1990’s. So taking in this Swiss progressive metal act on their second release "All Gods Are Gone" my hopes are high for not hearing another Dream Theater clone – and it’s safe to say Appearance Of Nothing produce music able to stand on their own.

With these 7 songs you get a sense of cultural themes- including a slightly Irish – Thin Lizzy vibe – during “Second God” which also contains some special death vocals out of Dan Swanö, and a flair for the slow building dramatics during the 9 minute epic “Sweet Enemy” where Devon Graves (Psychotic Waltz/ Dead Soul Tribe) takes over the lead vocals with his psychedelic range. Musically the five piece aren’t afraid to have individual members take the lead to enhance the movements of the song – as you’ll sometimes get some jet propelled bass work from Omar Cuna, then the next passage the fleet of finger keyboard dancing from Marc Petralito. My favorite song “Destination” has nifty off time guitar parts and soulful, deep vocal melodies while the mid-section carries an epic Dio vibe.

These guys just evoke a sense of confidence in their chemistry and abilities that isn’t something you expect in progressive metal these days. If they want to throw down some techno keyboard parts in “The Call Of Eve”, they can – and figure out a way to make this work within their mainframe. Expect darker riffing amongst the stellar instrumentation – having clearly studied the models of progressive metal laid before them and willingly veered into their own pasture.

Much like Evergrey or Pain Of Salvation, Appearance Of Nothing venture into their own special niche in terms of dynamic progressive metal – which I am certain will polarize their following and the opinions of the internet community. In the end, "All Gods Are Gone" appeals to expansive, open-minded individuals who seek intelligent, thought provoking songs – so include me fervently in the camp.