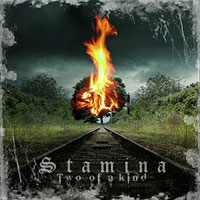 STAMINA – Two Of A Kind

Italian melodic metal with subtle neo-classical and power influences, Stamina release their second album "Two Of A Kind" on Germany’s Ice Warrior Records, a sub-division for Rock It Up. Starting in 2001 and recording a series of demos during 2003-04, their debut album Permanent Damage came out in late 2007 – so they’ve had years to gel in rehearsal studios and perform live opening for festival audiences and touring acts in Italy. The five-piece (although session drummer Alessandro Beccati performs on the album, permanent drummer Umberto Spiniello now completes Stamina) take their cues from bands as wide ranging as Royal Hunt, Rainbow, Tony Martin-era Black Sabbath and Symphony X among others.

Two Of A Kind contains 10 main tracks along with 3 bonus cuts- the latter featuring two lead vocal performances from Kenny Lubcke ( Royal Hunt, Cornerstone, Narita), who also gets four backing vocal credits on the main album. “Maker Of The Universe” certainly has that epic Rainbow meets Royal Hunt feel – deep rich keyboards and multi-part chorus harmonies carrying the arrangement while “Too Tired To Live” has that neo-classical 80’s guitar appeal on epic ballad lines. The main album contains plenty of tracks that really lock onto a hook or groove rhythmically while throwing down subtle progressive flares in the keyboard, drum or guitar arenas – most notably “Burn Your Fears” and “Supremacy”. I love the bright Kansas-like keyboard chords from Andrea Barone on “Power Of Love” – Steve Walsh would be so proud.  Stamina showcase some of their light jazz and classical theory knowledge in the six minute “Maker Of The Universe” where the main riff mirrors the best of Europe and Rainbow and Giorgio Adamo gives one of his best vocal performances on the album.

Where Giorgio loses me is when he attempts to reach for the stratosphere, shattering glass screams. The aforementioned “Too Tired To Live” features an ascending note that he assuredly will shatter a few eardrums with- and as such I prefer the Kenny Lubcke version that’s tacked on as bonus material. It’s not that Giorgio can’t sing – though I believe he needs to understand his strengths and limitations, accenting the former and eliminating the use of the latter.

This is a sub-genre where it’s difficult to stand out from the pack without evoking memories from the veterans. Stamina have potential – I just feel they need a bit more control and restraint to balance out the vocal/music impression and overall up the enjoyment level of these songs.