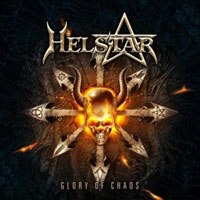 One of the pioneers of the American power metal movement, Texas’ Helstar certainly catapulted a fervent movement of followers with their track record in the 80’s. Even back then they took their music to another level, spending countless hours crafting their music and lyrics, as" Remnants Of War" and "A Distant Thunder" gave musicians plenty to spout off about with the dual Yngwie on steroids lead play and James Rivera masterful, sinister commander vocals dripping in metal.

The latest version of Helstar contains the key songwriting team of guitarist Larry Barragan and James Rivera, along with guitarist Rob Trevino, bassist Jerry Abarca and new drummer Mikey Lewis. Not merely content to ride the wave of their conventional mode, "Glory Of Chaos" truly exemplifies a group of musicians who want to grow within the confines of metal. Gaining the chance to hear track by track analysis from Mr. Rivera prior to hearing this in its entirety, "Glory Of Chaos" isn’t stuck in the past – as this material takes elements of thrash and black metal into consideration for a very aggressive top to bottom recording.

Opening with “Angels Fall To Hell”, the guitar tones and rhythms incorporate more of current Nevermore feel along with the high pitch Halford-esque melodies during the chorus and a newer blood curdling low range I rarely hear from this famous vocalist. Follow up “Pandemonium” contains more of a Slayer effect especially in the drum department as Mikey Lewis cavorts comfortably from snare to toms to cymbals like a madman. Do not fear – those who love the swirling riff work of Barragan and Trevino have plenty to sink your teeth into with “Monarch Of Bloodshed” and “Dethtrap” among others.

The surprising track occurs near the end, as “Alma Negra” would be Helstar’s ode to “Angel of Death” if you needed something with 10,000 volts of electricity flowing through your veins. Lyrically a sobering tale regarding serial killers and their mental outlook on life, Helstar illustrate the fact that keeping up with the times should give these veterans a broader appeal to all age groups while still understanding their skill set as talented musicians.

Let this not be the last Helstar studio album – they have plenty left in the creative tank.