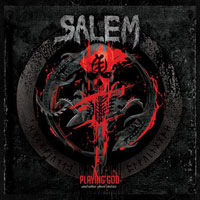 Have you every wondered what it would sound like it Soulfly played middle eastern melodies accompanied with screeching vocals? Because that is what Salem sounds like on their last release. In contrast to Soulfly however, it largely relies on hard staccato rhytms, not fit for headbanging but for marching.

And well, there we are at the heart of the record, it seems to ooze the claustrophobia of a nation surrounded by enemies. I can easily picture some Israeli soldiers in their Merkava getting pumped listening to Salem. While their sense of melody is pretty unique, I dislike the production which is overly sharp and accurate, the chords have no room to breathe and thus it feels… claustrophobic.

Additionally, I can’t really get on board with the topics the songs are about. As you might have figured by the album’s name, it is a collection of short stories in musical form, most having to do with books from the Old Testament. While again I can see how Israelis could relate to this, I can’t. “Exodus” is about the exodus of the Jews from Egypt which all in all is pretty fucking boring. I mean if the Jews would have risen and slain the Egyptians… but all they did is leave. Not very inspiring from my point of view. While we are at it: "Exodus" is one of the songs featuring female vocals in the refrain, singing “Movement of Jah people”, and a middle piece with only vocals, drums and bass which sounds like an excerpt from a reggae record. Very weird.

So all in all, even though Salem offer a very unique blend of middle eastern rhythms and melody, epic stories and aggression, it’s just not my cup of tea. 2 for the effort.